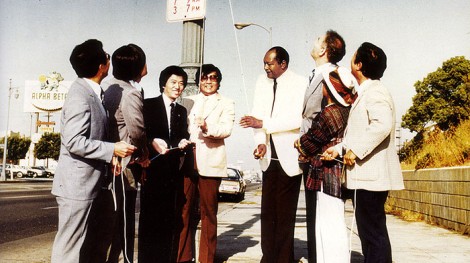 Nicknamed the “L.A. district of Seoul City”, Koreatown in Los Angeles evokes both a local and global concept of place.  Though its geographic boundaries have been in flux since the first Korean immigrants arrived in Los Angeles in the early 1900s, Koreatown today can be roughly delineated from the south to north between Pico Boulevard and Melrose Avenue and from east to west between Wilton Place and Fairfax Avenue.1 Located about three miles west of downtown Los Angeles, Koreatown is the only officially recognized Korean enclave in the United States that is identified by “Koreatown” signs on the highway and on the streets surrounding its neighborhood.2 The L.A. City Council officially recognized Koreatown as a section of the city in 1980 though Korean immigrants have inhabited the area since the 1960s.  In the 1970s this the area was known as the mid-Wilshire district.